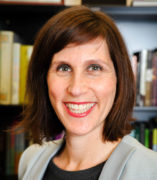 Rachel Havrelock is Professor of English at the University of Illinois at Chicago where she also directs The Freshwater Lab, an environmental humanities initiative focused on the North American Great Lakes and environmental justice.

The Freshwater Lab is an initiative to communicate Great Lakes water issues to the general public, create tools to visualize the current state and future scenarios of water sources, engage unaffiliated groups in water planning- and train a new generation of Great Lakes leaders.  With a focus on the Great Lakes basin, the Freshwater Lab reaches outward to build relationships with water stewards from other parts of the world.

Freshwater Stories concerns Lake Michigan as it opens eyes to the pressing water issues of the twenty-first century and offers a tool in which anyone can begin to learn about their water.

The Backward River chronicles how the Chicago River came to flow backward and facilitate the offshoring of waste and transport of petroleum products.

Both digital storytelling sites reach toward new imaginaries and relationships between people and their local watersheds.

The Freshwater Lab convenes elected officials, researchers, activists, students and artists for summits and events aimed at fostering new alliances and realizing future possibilities for a watershed that holds over 20% of the world’s fresh water.

Along with urgent public facing work, Professor Havrelock researches questions of sovereignty, public trust, water delivery and privatization in the Great Lakes basin.  She is currently working on a book about the Great Lakes and their communities and what needs to happen for the Rust Belt to become the sustaining Water Belt.

Co-author with Kathleen Blackburn, “What to Do with the Chicago River?” Belt Magazine, February 25, 2020.

Op-ed, “Rust Belt no more: Chicago should be capital of the Water Belt", Chicago Tribune, February 8, 2018.

During decades of research in Israel (about which more below), Havrelock studied techniques and policies around the recycling of water.  With colleagues in Engineering, Urban Planning, and Earth and Environmental Science, Dr. Havrelock is laying the research groundwork for water recycling in Cook County and the State of Illinois.  Whereas water recycling tends to be seen as a solution for drought conditions, Havrelock envisions water reuse as a solution to flooding at the same time that it can anchor a clean industrial revolution in the Midwest.

Along with practical plans for a bright future along the Great Lakes, Rachel sustains an acute interest in stories, particularly those that give rise to geography, contour landscapes and draw borders.

Following a stint as a public storyteller, teacher and performer in the San Francisco Bay Area, Rachel began her doctoral work in Near Eastern Studies and Folklore at the University of California, Berkeley.  She gathered stories about the Jordan River from religious traditions and lived experience in a valley politically contested by Israelis, Palestinians and Jordanians.  Ten years of research in the Jordan River Valley and its environs led Rachel to write and direct the hip-hop play From Tel Aviv to Ramallah staged across the world, to author River Jordan: The Mythology of a Dividing Line (University of Chicago Press, 2011) and to join the International Advisory Council of the NGO Ecopeace Middle East that brings inhabitants of the region together around water sources both shared and dwindling.

Havrelock’s 2020 book, The Joshua Generation: Israeli Occupation and the Bible (Princeton University Press) shows how Israel’s founders adopted biblical stories of conquest as the parameters of the young country’s framing narrative.  Subsequent generations of Israeli leaders amplified this militarism as occupation became both a political regime and a cultural condition. Because 2020-21 saw widespread use of the Joshua paradigm in Israeli and American politics alike, Havrelock published two relevant op-eds:

Op-ed, “Revisiting Jericho: The Biblical exegesis of violence in America and Israel,” Sightings, Magazine of the University of Chicago Divinity School, March 4, 2021.

Research on the Jordan River turned up a defunct oil pipeline that runs beneath the Jordan south of the Sea of Galilee.  On the trail of the pipeline, Rachel spent months at archives in Britain and in the Middle East then found the remains of oil infrastructure with colonial era maps.  The oil pipeline in question was the Iraq Petroleum Company’s (IPC) Kirkuk to Haifa line, the world’s first transnational pipeline, devised during World War I and completed in 1935.  Although it operated for only thirteen years, the IPC pipeline influenced where Middle Eastern boundaries were drawn, how distinct religious and ethnic groups came to interrelate in the context of nationalism and a skewed system of alienating residents from the resources beneath their feet.

While at work on a book about the Kirkuk to Haifa pipeline, Rachel has published a number of articles on the topic:

“Pipelines in the Sand: The Middle East after Sykes-Picot,” Foreign Affairs, May 17, 2016.

Although it was a direct ancestor of the BP Corporation, all the twentieth century oil majors had a stake in the Iraq Petroleum Company.  This fact combined with the proximity of a BP Tar Sands Refinery on Lake Michigan expanded Rachel’s petroleum interests.  After her journey along the IPC pipeline, Rachel began following local lines and tracking the global networks of oil.  Writing of this nature can be found on the Freshwater Stories digital storytelling site and in Belt Magazine.

In addition to pipeline networks, Professor Havrelock studies the relationships between petroleum and novels and how literary forms both absorb and ignore accelerated climate change.  Publications in this area include the collectively authored After Oil, Alberta: University of Alberta, Petrocultures Research Group, 2016 and “Energy,” Special Keyword Issue on Capital and the Secular Journal of the American Academy of Religion 87:3 (2019), 607-617.

Rachel’s research program aims to illustrate the degree to which water and oil do not mix.

Rachel Havrelock’s publications can be found on academia.edu.

River Jordan: The Mythology of a Dividing Line (Chicago: University of Chicago Press, 2011).

Op-ed, “Rust Belt no more: Chicago should be capital of the Water Belt, Chicago Tribune, February 8, 2018.

“Pipelines in the Sand: The Middle East after Sykes-Picot,” Foreign Affairs, May 17, 2016.