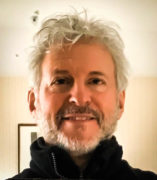 Lennard Davis has written about biocultures, disability, and normality. His book Enforcing Normalcy: Disability, Deafness And The Body gives a political and social history to the idea of normality. Bending Over Backwards: Disability, Dismodernism, And Other Difficult Positions is a collection of essays that covers the relation of disability to contemporary and historical culture and politics. Davis has also written on the history and theory of the novel. His work Factual Fictions: The Origins Of The English Novel presents a Foucauldean reading of the novel as a discourse emerging from the matrix of journalism, history, and the law. Resisting Novels: Fiction And Ideology continues that work by describing the formal and constitutive ways in which novels are inherently ideological structures defending and resisting bourgeois capitalism. His work includes My Sense Of Silence: Memoir Of A Childhood With Deafness, Go Ask Your Father: One Man’s Obsession with Finding His Origins Through DNA Testing, and The Sonnets: A Novel. He is editor of The Disability Studies Reader (now in its 5th edition) and co-editor of Left Politics And The Literary Profession. His recent books are The End of Normal: Identity in a Biocultural Era (U of Michigan Press, 2014), Obsession: The Biography of a Disease (University of Chicago Press, 2008).  His Enabling Acts: The Hidden Story of How the Americans with Disabilities Act Gave the Largest US Minority Its Rights (Beacon Press, 2015) was published on the 25th anniversary of the ADA. His most recent edited book is Beginning with Disability: A Primer.

Factual Fictions: The Origins of the English Novel

The End of Normal: Identity in a Biocultural Era

The Sonnets: A Novel

Bending Over Backwards: Essays on Disability and the Body

My Sense of Silence: Memoirs of a Childhood with Deafness