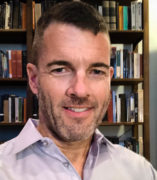 Mark Canuel is Professor of English and Director of the Institute for the Humanities.  His research and teaching interests focus primarily on the areas of British Romanticism, Critical Theory, Political Theory, and Aesthetics.

His work explores the connections between political and literary forms, particularly as they emerged in response to the pressures of revolution, reform, and religious dissent between the 1770s and the 1820s. He is author of three monographs: Religion, Toleration, and British Writing, 1790-1830 (Cambridge, 2002); The Shadow of Death: Romanticism, Literature, and the Subject of Punishment (Princeton, 2007); and Justice, Dissent, and the Sublime (Johns Hopkins, 2012).  He is also editor of British Romanticism: Criticism and Debates (Routledge, 2015), a collection of new and previously published critical essays on Romanticism. He is currently at work on a new book on the aesthetics of political progressivism in the Romantic age.  His numerous essays have appeared in journals including ELH, Nineteenth-Century Literature, Representations, Studies in Romanticism, and The Wordsworth Circle.

The Shadow of Death: Literature, Romanticism, and the Subject of Punishment