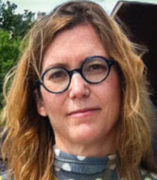 Jennifer Ashton’s research and teaching focus on poetics and the history of poetry, with a particular emphasis on modern and contemporary American poetry.

Professor Ashton’s book publications include From Modernism to Postmodernism:  American Poetry and Theory in the Twentieth Century (Cambridge UP 2005) -- which examines the critical reception (and misreading) in the latter half of the century of several major modernist figures, including Gertrude Stein, Laura Riding, William Carlos Williams, and Louis Zukofsky -- and an edited volume, The Cambridge Companion to American Poetry since 1945 (Cambridge UP 2013). Her articles and essays have appeared in ELH, ALH, Modernism/Modernity, MLN, Interval(le)s, Chicago Review, and numerous edited collections.  She is also a founding member of the editorial collective of the arts and politics journal, nonsite.org. She is currently completing a book on the aesthetics and politics of very recent experimental poetry in the U.S., tentatively titled Poetry and the Price of Milk: Lyric Labor and the Market in 21st-Century American Poetry

From Modernism to Postmodernism: American Poetry and Theory in the Twentieth Century