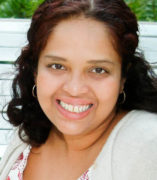 Mary Anne Mohanraj is the author of Bodies in Motion (HarperCollins), The Stars Change (Circlet Press) and thirteen other titles. Bodies in Motion was a finalist for the Asian American Book Awards, a USA Today Notable Book, and has been translated into six languages.  The Stars Change was a finalist for the Lambda, Rainbow, and Bisexual Book Awards.

Mohanraj is Clinical Associate Professor of English at the University of Illinois at Chicago, and lives in a creaky old Victorian in Oak Park, just outside Chicago, with her partner, their two small children, and a sweet dog.  Recent publications include stories for George R.R. Martin's Wild Cards series, stories at Clarkesworld, Asimov's, and Lightspeed, and an essay in Roxane Gay’s Unruly Bodies. Recent titles include Survivor (a SF/F anthology), Perennial, Invisible 3 (co-edited with Jim C. Hines), and A Feast of Serendib (a Sri Lankan cookbook).  Forthcoming titles include Vegan Serendib and Jump Space (a mosaic novel).

Silence and the Word