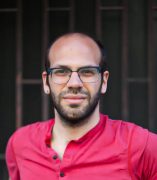 Raphael Magarik studies sixteenth and seventeenth century British literature, with interests in secularization and religion, theories of narration and the pre-history of the novel, labor and theatrical collaboration, Christian Hebraism and biblical studies, and early modern women's writing. His first book project, "The Fictional Bible in the English Renaissance," argues that early modern scholars invented the idea of the biblical narrator, which in turn offered English poets models for their own, biblically themed poems and for fictive invention. He has published work from that project in Reformation, and he has articles in Milton Studies, Notes & Queries, the Journal for Early Modern Cultural Studies, and PMLA. He has also written popularly, including for The New Republic, The Atlantic, The Daily Beast, Jacobin, and Haaretz. He is a contributing writer at Jewish Currents.