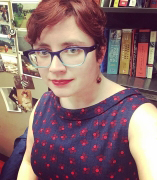 Mary Hale is completing her dissertation, Democratic Conventions: the politics of form in the Gilded Age.  Mary studies 19th Century literary history, political fiction and thought, and African American literature.  During her time at UIC, Mary has taught a variety of courses in 19th and 20th century American and Multi-ethnic American Literature as well as first-year writing classes. In 2016, she won the Department of English Distinguished Teaching Award. Her article, “The Political Procedural: the Novel's Contribution to the Rise of Nonpartisanship and the Abandonment of Reconstruction,” appeared in the December 2017 issue of American Literature.