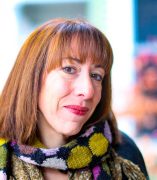 Gina Frangello is the author of four books of fiction, most recently A LIFE IN MEN, which is now under development as a series on Netflix, and EVERY KIND OF WANTING, included by both Chicago Magazine and The Chicago Review of Books as one of the "Best Books of 2016." Gina holds a long association with UIC, having completed her Master's in English in the Program for Writers in 1997 and serving as the Executive Editor of the literary magazine Other Voices, which was housed in the English Department until 2007. Gina went on to found and run the all-fiction book imprint, Other Voices Books until 2014, also running the writing retreat Other Voices Queretaro in the Central Highlands of Mexico. She has also served as the Fiction Editor of the popular online literary community The Nervous Breakdown, the faculty editor for TriQuarterly Online, and the Sunday Editor of The Rumpus, and is currently the faculty advisor for The Coachella Review. Her debut memoir, BLOW YOUR HOUSE DOWN, will be published in 2021 on Counterpoint. Gina's fiction and nonfiction have also appeared in venues such as Ploughshares, Fence, Salon, Psychology Today, the Boston Globe, the Los Angeles Times, the Chicago Tribune, Dame and the Chicago Reader. She can be found at ginafrangello.org.