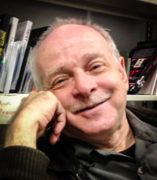 Martin Rubin is a lecturer in the English Department at UIC, where he teaches undergraduate courses in film history.  He is also associate director of programming at the Gene Siskel Film Center.  His publications include the books Showstoppers: Busby Berkeley and the Tradition of Spectacle (Columbia University Press, 1993) and Thrillers (Cambridge University Press, 1999), as well as articles and essays on such topics as biker films, serial killer films, science fiction literature and film, and American cinema of the 1930s.   He received his BA in English from Yale University, and his MA and PhD in Cinema Studies from Columbia University.