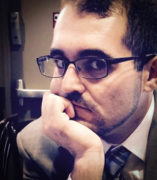 Jeffrey C. Kessler has taught a wide range of courses including First-Year Writing, 19th Century Literature, Intro to Literary Studies, Intro to Poetry, and Grammar and Style. He is currently working on two projects. The People’s Grammar: Democratic Approaches to Writing and Style connects grammar and writing instruction with democratic principles of style and language. A textbook written in collaboration with Doug Sheldon of UIC, The People’s Grammar approaches language as a cooperative activity, encouraging participants to be flexible, accurate, intentional, and democratic. While most grammar textbooks offer detailed discussion of rules and linguistic structures, this book looks to harness implicit knowledge of grammar that students already possess in the ways that they speak and write. This allows students from the very beginning to start playing with grammar and structure in order to investigate the ways their choices shape meaning.

Dr. Kessler’s second project focuses on the intersection of fiction and criticism in the nineteenth century. His book project, Portraits of the fin-de-siècle, traces the role of portraiture in late nineteenth-century Britain in literature, criticism, and art in such figures as John Singer Sargent, Henry James, Vernon Lee, Walter Pater, J. M. Whistler, and Charles Ricketts. His work has appeared in Nineteenth Century Contexts and English Literature in Transition: 1880-1920. He earned his PhD from Indiana University.